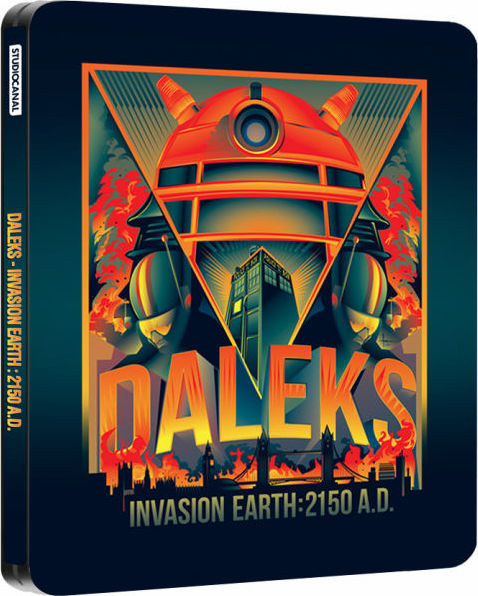 Originally done as an official print for Under The Floorboards, Orlando Arocena’s “Daleks” image is bright, bold and brilliant all rolled up into one phenomenal piece.  Now fans can get the image as the cover of a very limited edition Blu-ray steelbook which is limited to only 2000 copies.  (CLICK HERE TO PREORDER)

Daleks’ Invasion Earth: 2150 A.D – 1966; Again, based on an original story from the BBC TV Series, Dr. Who and his companions arrive on Earth in the year 2150 AD, to discover that the planet has overrun by Daleks and the population enslaved. The time travellers assist human resistance groups to foil the Daleks’ plan to mine the Earth’s core.  The sci-fi adventure is directed by Gordon Flemyg and stars:  Peter Cushing, Bernard Cribbins, Ray Brooks, Andrew Keir, Roberta Tovey, Jill Curzon.
http://youtu.be/o5VniqDkGuM

CLICK HERE to head over to Orlando’s BEHANCE PAGE to see some process shots of this awesome image.