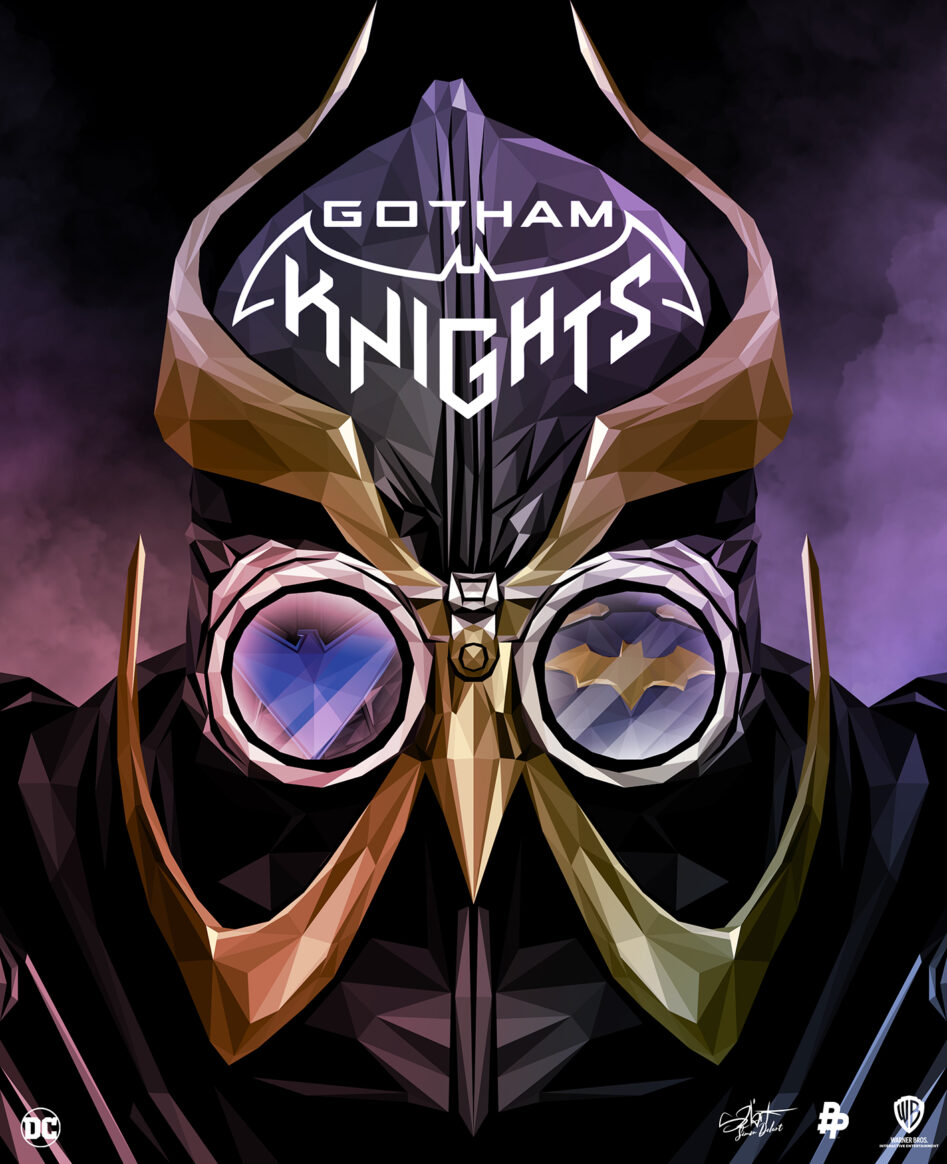 There were a LOT of games that got pushed from 2021 to 2022 and we can’t WAIT to play a ton of them. We created posters and mock game boxes for some of our favorites and we even invited some guest artists along for the ride. Which games are YOU looking forward to playing?

“Batman is dead. A new expansive, criminal underworld has swept the streets of Gotham City. It is now up to the Batman Family; Batgirl, Nightwing, Red Hood, and Robin; to protect Gotham, bring hope to its citizens, discipline to its cops, and fear to its criminals. From solving mysteries that connect the darkest chapters in the city’s history to defeating notorious villains in epic confrontations, you must evolve into the new Dark Knight and save the streets from descent into chaos.

Gotham Knights is an open-world, action RPG set in the most dynamic and interactive Gotham City yet. In either solo-play or with one other hero, patrol Gotham’s five distinct boroughs and drop in on criminal activity wherever you find it.“

“The galaxy is yours with LEGO Star Wars: The Skywalker Saga! Play through all nine Star Wars saga films in a brand-new LEGO video game unlike any other. Experience fun-filled adventures, whimsical humor, and the freedom to fully immerse yourself in the LEGO Star Wars universe like never before.“

“Set in the darker, supernatural side of the Marvel Universe, Marvel’s Midnight Suns is a tactical RPG from the creators of XCOM. As the Hunter, a legendary demon slayer with a mysterious past, you’ll lead a team of legendary Marvel heroes as they attempt to stop the Mother of Demons from completing an ancient prophecy and summoning her evil master, Chthon.“

“Scorn is set in a nightmarish universe of odd forms and somber tapestry. It is designed around the idea of “being thrown into the world”. Isolated and lost inside this dream-like world, you will explore different interconnected regions in a non-linear fashion. Every location contains its own theme, puzzles and characters that are integral in creating a cohesive world.“

From Santa Monica Studio comes the sequel to the critically acclaimed God of War (2018). Fimbulwinter is well underway. Kratos and Atreus must journey to each of the Nine Realms in search of answers as Asgardian forces prepare for a prophesied battle that will end the world. Along the way they will explore stunning, mythical landscapes, and face fearsome enemies in the form of Norse gods and monsters. The threat of Ragnarök grows ever closer. Kratos and Atreus must choose between their own safety and the safety of the realms.

Featuring an original narrative set within an expansive open-world city of Metropolis, Suicide Squad: Kill the Justice League puts the four DC Super-Villains on a collision course with an invading alien force and DC Super Heroes who are now laser-focused on destroying the city they once vowed to protect. All the while, the Suicide Squad must be mindful of the lethal explosives implanted in their heads that could go off at the first sign of defiance.

Each squad member has their own unique moveset with enhanced traversal abilities to freely explore the dynamic open-world of Metropolis, along with a variety of weapons to customize, and skills to master.

Take down The Justice League yourself in single-player or team up with friends in multiplayer co-op.

Join Aloy as she braves the Forbidden West – a majestic but dangerous frontier that conceals mysterious new threats.

Starfield is the first new universe in 25 years from Bethesda Game Studios, the award-winning creators of The Elder Scrolls V: Skyrim and Fallout 4. In this next generation role-playing game set amongst the stars, create any character you want and explore with unparalleled freedom as you embark on an epic journey to answer humanity’s greatest mystery.

“A driving and lifestyle experience unlike any other. The brand new Test Drive Unlimited keeps the DNA from the first games, and revamps it for the modern era. You have the freedom to progress however you like, the classic open championship concept returns too. Live your best life. Race, cruise, and hang out with your friends until the sun goes down and even after!”

“Rise, Tarnished, and be guided by grace to brandish the power of the Elden Ring and become an Elden Lord in the Lands Between.

In the Lands Between ruled by Queen Marika the Eternal, the Elden Ring, the source of the Erdtree, has been shattered.

Marika’s offspring, demigods all, claimed the shards of the Elden Ring known as the Great Runes, and the mad taint of their newfound strength triggered a war: The Shattering. A war that meant abandonment by the Greater Will.

And now the guidance of grace will be brought to the Tarnished who were spurned by the grace of gold and exiled from the Lands Between. Ye dead who yet live, your grace long lost, follow the path to the Lands Between beyond the foggy sea to stand before the Elden Ring.

And become the Elden Lord.“

“KIRBY AND THE FORGOTTEN LAND”

“Float off on an all-new adventure as the powerful puffball, Kirby. Explore in 3D stages as you discover a mysterious world with abandoned structures from a past civilization—like a shopping mall?! Copy enemies’ abilities like the new Drill and Ranger and use them to attack, explore your surroundings, and save the kidnapped Waddle Dees from the ferocious Beast Pack alongside the mysterious Elfilin. Hope you’re hungry for an unforgettable adventure!”

“Sifu is the new game of Sloclap, the independent studio behind Absolver. A third person action game featuring intense hand-to-hand combat, it puts you in control of a young Kung-Fu student on a path of revenge.”

“Another helping of classic Cuphead action awaits you in Cuphead – The Delicious Last Course! Brothers Cuphead and Mugman are joined by the clever, adventurous Ms. Chalice for a rollicking adventure on a previously undiscovered Inkwell Isle! With the aid of new weapons, magical charms, and Ms. Chalice’s unique abilities, players will take on a new cast of fearsome, larger than life bosses to assist the jolly Chef Saltbaker in Cuphead’s final challenging quest! For all those with an appetite for adventure, set sail for D.L.C. Isle today in The Delicious Last Course.”