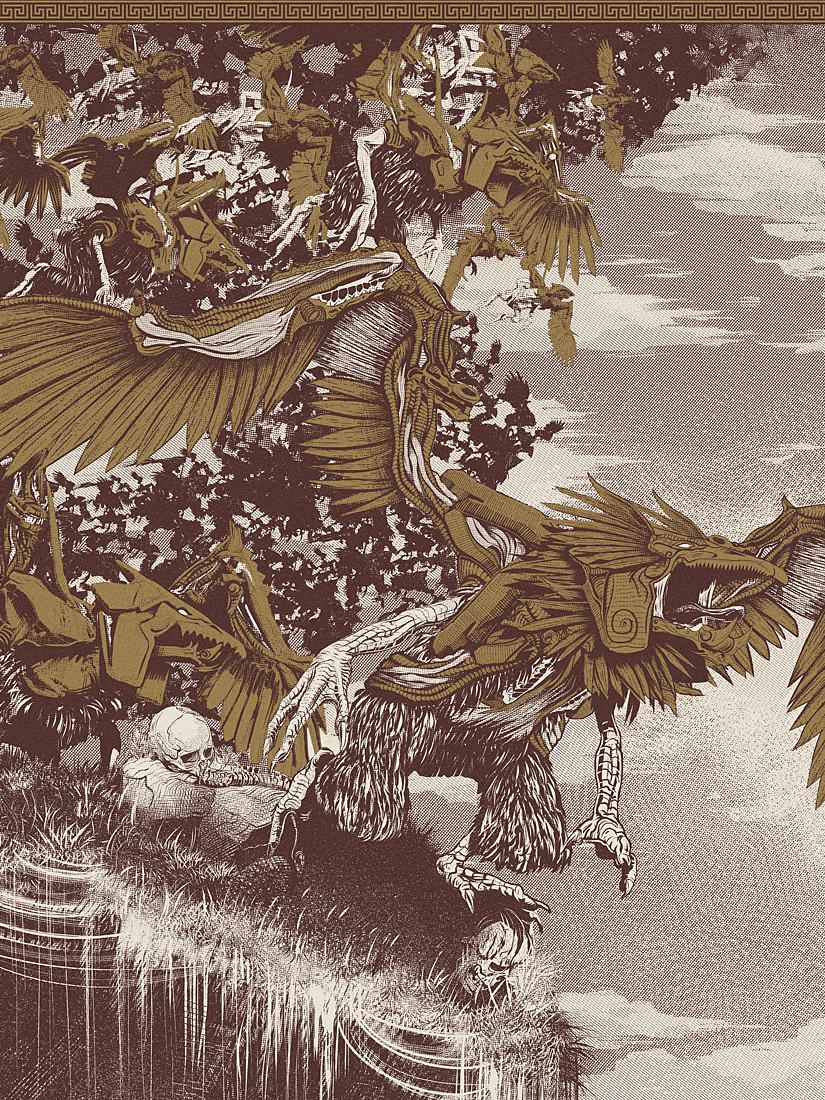 On December 12th, Famp Art is partnering with Bottleneck Gallery on a new exhibit called “The Labours Of Hercules.”  In Greek Mythology, Hercules, the son of Zeus, spent 12 long years paying penance for murdering his six sons.  During these 12 years he was at the service of King Eurystheus who gave him 12 total tasks or labours with each one being as fantastic and incredible as the next. 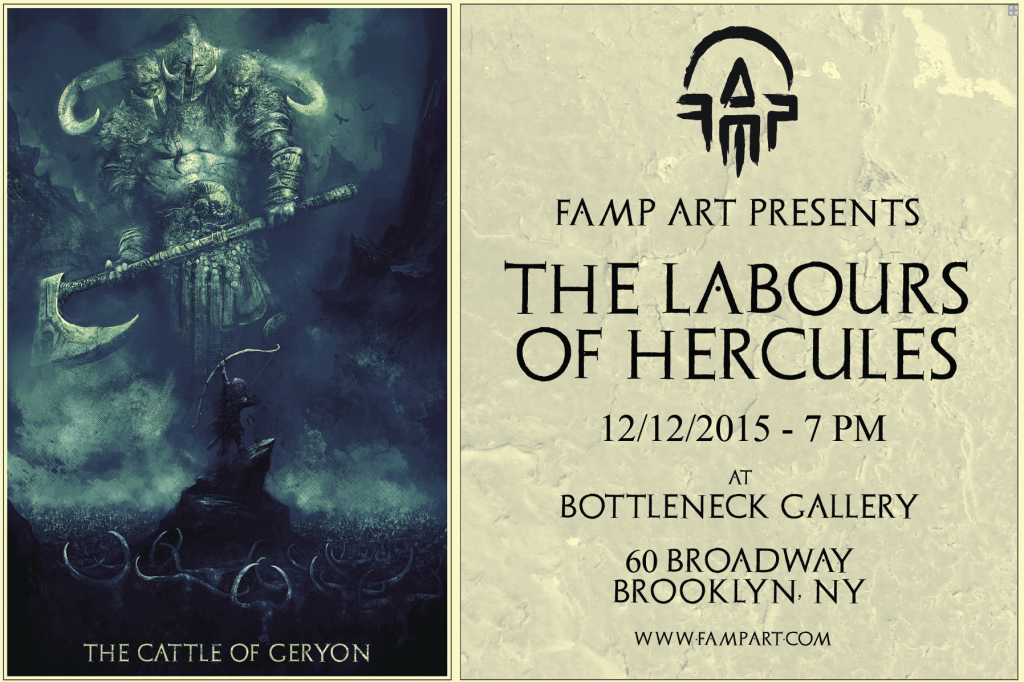 The 12 Labours were as follows:

Chris Skinner is part of this fantastic show and he was given Hercules 6th Labour, to defeat the Stymphalian birds.  These aren’t your everyday birds either, here is how Wikipedia describes them:  The Stymphalian birds, man-eating birds with beaks of bronze and sharp metallic feathers they could launch at their victim. They were sacred to Ares, the god of war. Furthermore, their dung was highly toxic. 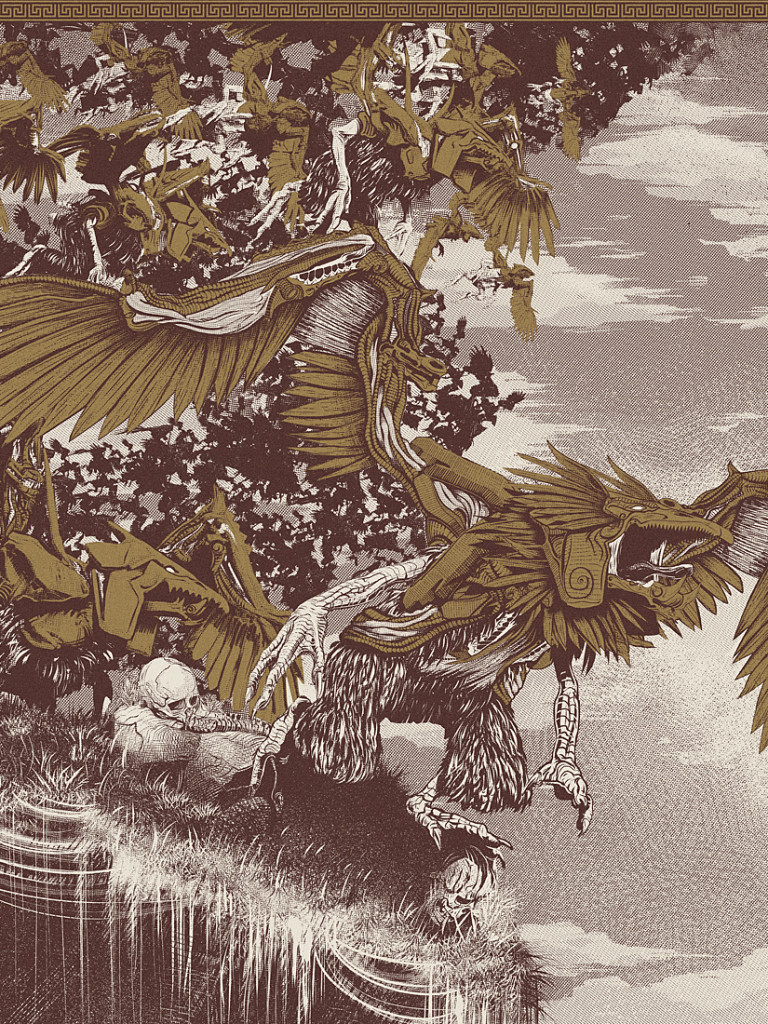 They had migrated to Lake Stymphalia in Arcadia, where they bred quickly and took over the countryside, destroying local crops, fruit trees, and townspeople. Hercules could not go too far into the swamp, for it would not support his weight. Athena, noticing the hero’s plight, gave Hercules a rattle which Hephaestus had made especially for the occasion. Hercules shook the rattle and frightened the birds into the air. Hercules then shot many of them with his arrows. The rest flew far away, never to return. 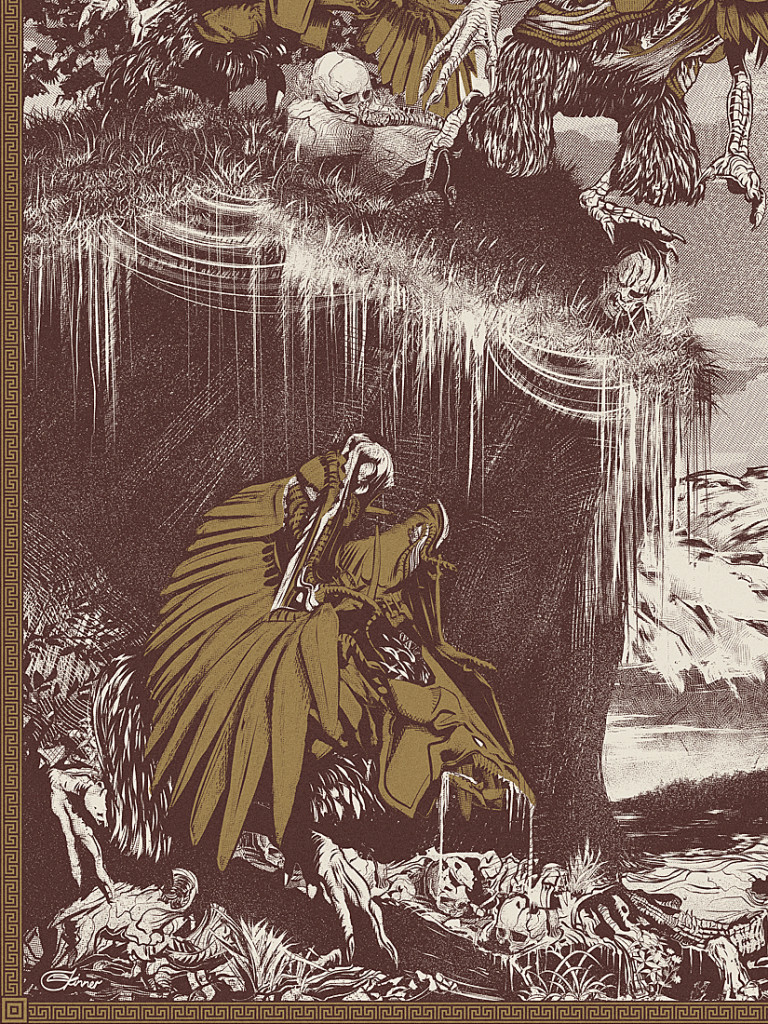 Here is what Chris had to say about the project.

I was honored when Fampart invited me to be part of this show as I have always loved Greek Mythology, then I saw the list of amazing artists involved and started to worry about how I would interpret the 6th Labour of the Stymphalian Birds which had been assigned to me. I immediately knew that I didn’t want to do a standard looking bird, this is Greek Mythology after all! From research my design for the birds are based on this description,

‘The Stymphalian Birds are man-eating birds with beaks of bronze and sharp metallic feathers they could launch at their victims. They bred quickly and swarmed over the countryside, destroying crops, fruit trees, and townspeople’. 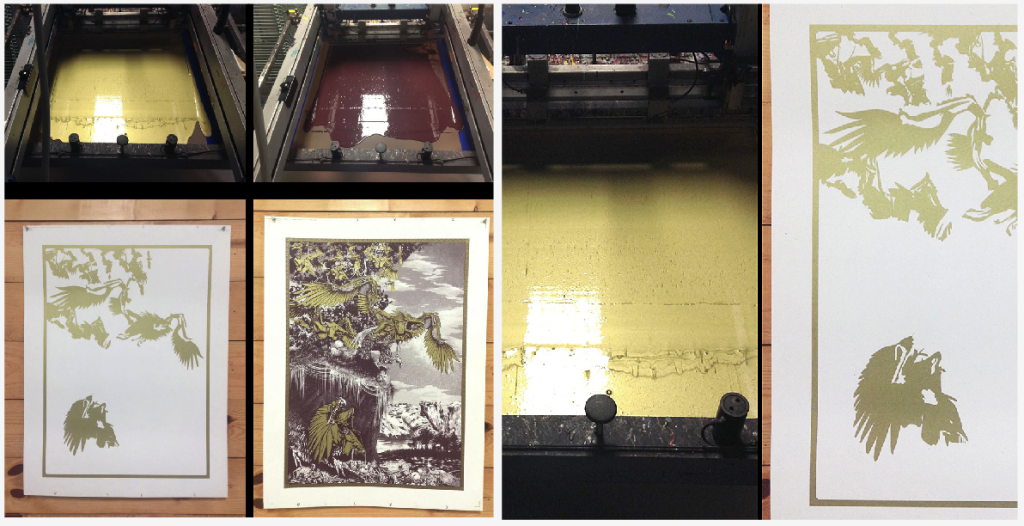 I decided I wanted to include some hints of technology mixed with the birds body which allows them to fire feathers at their prey and the design of the head is based around the shapes used for ancient Greek helmets. I wanted my Stymphalian Birds to be big fierce creatures and the scale of them can be seen by the size of the various human skulls and remains scattered around… 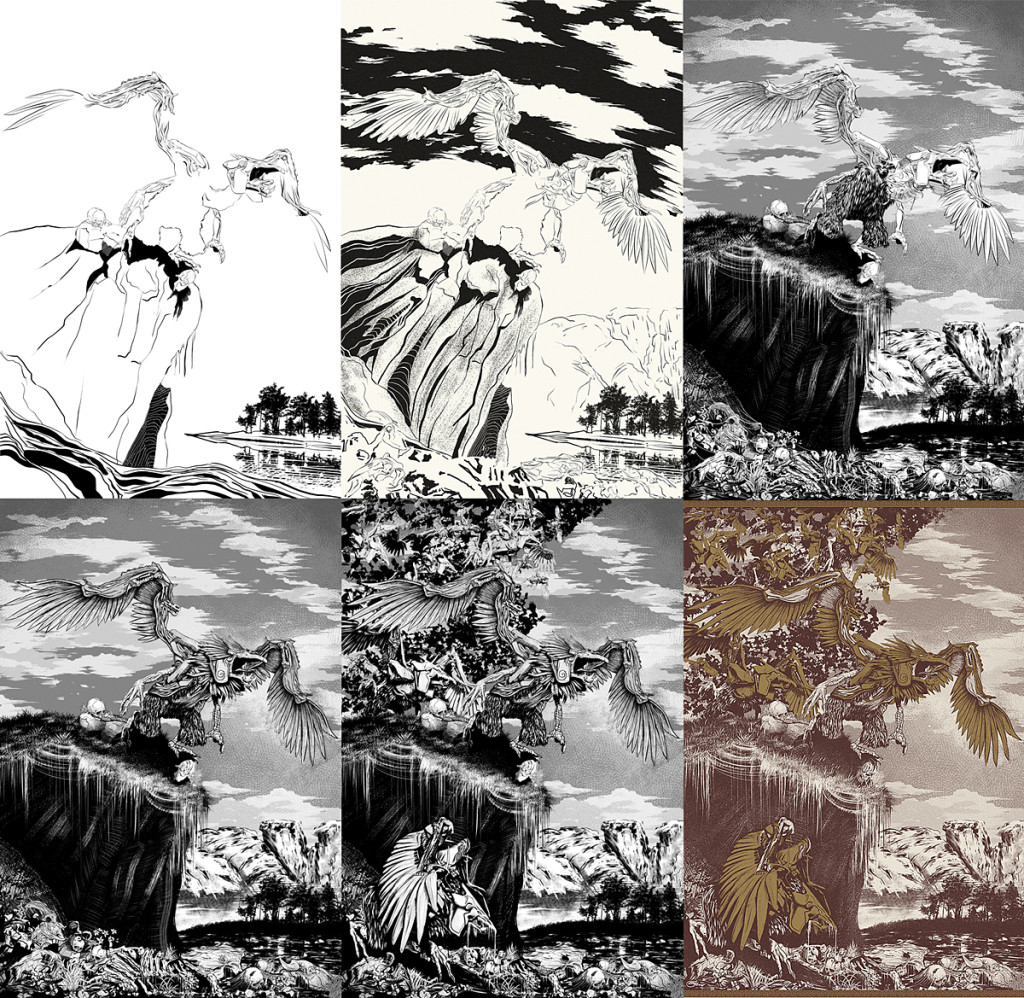 Hercules couldn’t enter the swamp as the ground wouldn’t support his wait so he used a rattle made by Hephaestus and given to him by Athena to scare the birds into the air where he then shot many of them down with his bow and arrow. 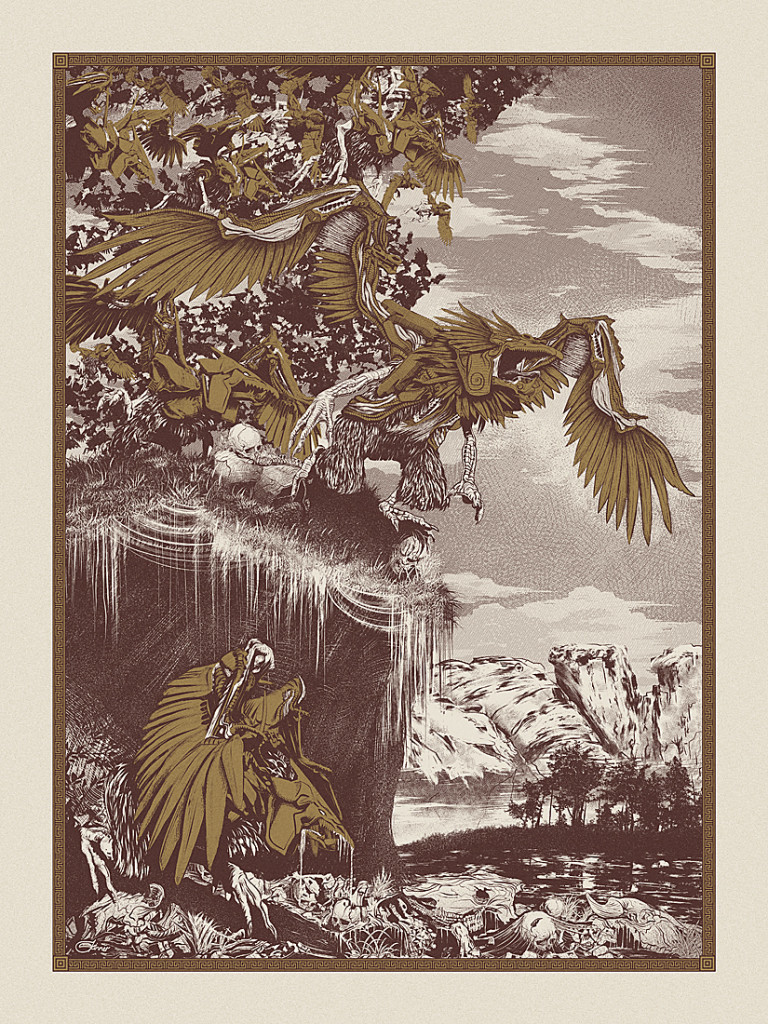 The show is free to attend and there will be free beer, wine and other beverages for those in attendance. As a bonus, Famp Art will also be giving out a free print out by artist Glyn Smyth to the first 20 people in line. You can join the Facebook event page to stay up to date on what will be released at the show.  Pieces will start being unveiled the week of November 30th.

All art that isn’t sold at the gallery will be put online Monday, December 13th and will go on sale at 12pm Est. Prints will ship worldwide.