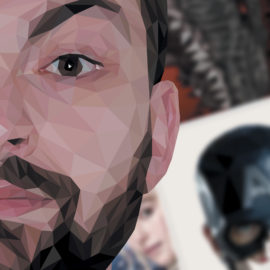 I grew up surrounded by comics, films and music. My parents had a huge collection of graphic novels and Franco-Belgian comics! They also had a reedition of the Fantastic Four and Kirby’s Silver Surfer. Comics have been extremely present in my life indeed. In this respect, I must also mention the revelation I had when my father recorded Tim Burton’s Batman for me (the film terrified me and fascinated me at the same time), the Strange magazine volumes that I unearthed at my grandparents’ place and the arrival of Batman: The Animated Series. There was also a video club next door. I went there every Wednesday afternoon and I challenged myself to watch the complete filmography of my idols of that time: Stallone, Van Damme, Shwarzy, Chan, Gibson etc, etc… All that, sprinkled with video games and Canal + humour, and you get a good 80s/90s pop culture product!  I was struck with admiration when I contemplated Drew Struzan’s posters, and today, his compositions and his colours are real references for me.  My desire of making alternative posters stems from my discovery of Olly Moss’ work and his ability to find a concept that goes beyond mere illustrations. This challenge motivates me.
Send Inquiry