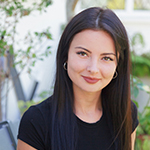 Freya Betts is a 24 year old illustrator. After leaving school at 18 she pursued her passion for film and landed a job in the film industry, where she had the privilege of art working and designing film campaigns for Universal, Paramount, Fox, Warner Bros and Disney to name but a few.  Currently she lives off grid in a ‘tiny home’ cabin in Cornwall, where she is a freelancing as an illustrator and represented by both the Poster Posse and Jelly. Her clients include Royal Mail, Uber, Apple TV
Send Inquiry