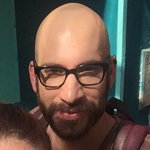 Chris Christodoulou is a London based Graphic Artist. He began working in the fashion industry but his passion for movies and video games launched him a new career in the entertainment industry in 2013. He specialises in key art, style guides and assets banks, packaging and licensed art development. Chris has been involved in projects for Warner Bros., 20th Century Fox, Universal, Netflix, Activision, Microsoft Studios, Square Enix and more. Incredibly fortunate to have had his work appreciated and praised by some eminent figures from the film and music industry including Quentin Tarantino and Kiss’s lead singer, Gene Simmons. Chris’s work is produced digitally and aspires to create designs that are intricate, conceptual and always strives to transform each project into “eye candy.
Send Inquiry